A downloadable game for Windows and macOS

You are an ignorant simpleton. You need to consume as much media as possible to become an informed and productive member of society. Your entire self-worth depends on it. Use my convenient tool to consume many random videos at once, and finally become a well adjusted person!

SORRY FOR DOWNLOAD-ONLY. There are CORS permissions issues with the WebGL version that I can't do anything about :'( so you need to download the desktop version.

PLAY ON WIFI ONLY! The game is streaming tons of videos from the internet at the same time so it can use tons of MB.

CONSUME to add a new video to the screen

CLICK THE CORRECT WORDS based on the text's style formatting (the word is also somewhat related to the video, but that's unreliable)

TIPS
- Each video has 1 correct text format and 1 incorrect text format. Memorize the correct and incorrect styles so you can make the right choice.
- You gain exponentially more points the more videos there are on screen, but the text style differences get harder and more subtle
- If you drop below 0 points, the TV will turn off. Try staying alive for as long as possible with a high # of panels.

PLUGINS: TextMesh Pro, AV Pro free trial (this causes the watermark on the videos, which you should just ignore)

I find the aesthetics of these old propaganda and educational films so incredibly interesting, so it was a feast for me to witness the noise of all the movie pictures! However, I had to play the game several times before I really understood the concept - I first thought that different fonts actually meant only the type of font or maybe the color, but not all the little details like character spacing or font bordering. :D That was really difficult to distinguish over time, but hey, that's the game concept! A simple idea wonderfully implemented, congratulations! That's why I've recommended your game along with two others in one of our Ludum Dare 42 compilation articles. :) One minute of gameplay can also be seen in the article belonging to the video! :D Good luck with the ratings! 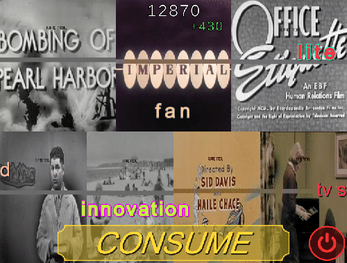